In 1966 God poured out His Spirit on the Church. Since that time the Church has known the Holy Spirit's power and ministry in the lives of the members and His presence in the services in an increasing way. According to Scripture, the people that fill the building are the church and it is God through the Holy Spirit He has given those who believe on Jesus for forgiveness that fills the people.

A new addition to the sanctuary was completed in 1975 increasing our seating capacity to 650. The building was also enlarged to include a fellowship hall and additional class rooms at that time. The seating arrangement was reversed with the Main Street entrance now s 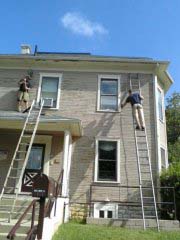 erving a decorative purpose only while the church is now entered from  Maple Street.

From 1972-2004 the church was the home of a Bible school dedicated to the training and education of Christians for service and ministry. Centerville Bible College, formed by Maranatha Institute,  has seen hundreds of students attending classes and the graduates are presently serving as pastors in churches across the country as well as missionaries on the foreign field.

The church property covers over three acres of land and  includes the church sanctuary and educational facilities. two parsonages, an office complex, classrooms and Library. William Browning has served as the Pastor since 1983.

Vineyard Affiliation
The Name of the Church was changed to CROSS POINT CHURCH on September
12,1999 to reflect the vision of the church to point people to the demonstration of God's
love on the cross and the provision for all the needs of mankind provided therein.

The Name also reflects the fact that it is at a cross point in life that people have a crisis of faith and can believe God and see his love revealed to them. The church being at the cross . We desire to be a caring, equipping community providing discipleship opportunities where people can mend,mature, minister, model and multiply as we serve the purposes of God in our generation.

In 2006 the church joined the Vineyard USA Community of churches and the name of the church became Cross Point Vineyard Church.

For all this we can only praise God for His goodness and grace and our continued privilege of witnessing to His love and saving power through the Gospel of our Lord Jesus Christ.